Yesterday we went trekking to see the famous mountain gorillas.

Approximately 700 gorillas live in the Volcanoes National Park, which straddles the Rwanda-Congo-Uganda border. They were made famous by Diane Fossey, and the movie, Gorillas in the Mist.

Each day 56 people are allowed to visit, and they go out in groups of eight, with guides, trackers and others.

We had an incredible time a beautiful day, magnificent weather, and the amazing gorillas.

There is simply no way to do justice to the experience in a short blog but we were so very close to these impressive animals. We were within ten feet of the silverback, who leads the group we saw, and we had to step off a trail to let a female and two young gorillas pass us they were about four or five feet from us. 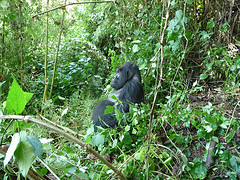 They are majestic, even regal in their manner of moving, and they calmly ate, groomed and sunned all while we watched for an hour.

All in all, an impressive experience.

After the gorillas, we drove a couple of hours to Shyira, a remote, hilly area, and eventually came to Shyira Hospital. It is operated by the Anglican Church of Rwanda, and has been led for the past seven years by Drs. Caleb and Louise King.

They both graduated from Carolina as undergrads and both were Morehead Scholars. And they both went to med school at Harvard. Louise is an internist and Caleb is a pediatrician.

This hard to reach place is beautifully situated, on the top of a mountain. They are doing amazing things in medicine, public health and much more with not very many resources.

We got a thorough tour today and saw several patients some with diseases I have never seen. For example I saw a woman with Pott's disease, which is vertebral tuberculosis.

We learned a lot about this beautiful country, and the people who are working to make it better, Rwandans and others.

And we learned some things about ourselves we have so much, and so much to be grateful for.

The opinions expressed herein are solely those of the author and do not necessarily reflect the position of the University of North Carolina at Chapel Hill or UNC Health Care. The content of this Web site is for informational purposes only and is not intended for use as diagnosis or treatment of a health problem or as a substitute for consulting a licensed health professional for medical advice, instruction, diagnosis, or treatment. If you have specific questions or concerns regarding a medical condition, please contact your physician or appropriately licensed health care professional. All relevant, appropriate comments will be posted after review.
%d bloggers like this: